Rekindle Your Wild Joy and Deep Belonging to the Earth 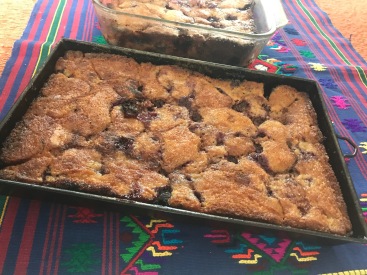 My mom, Tilla Fields, was an amazing cook. In her early years, she served as camp cook on cattle branding outings in the northerly Great Basin Desert. Yep, with a horse-driven chuck wagon and dutch ovens dug into the ground and everything. With her skills, she could have become a professional chef, but was too modest to go for such a career. So her family reaped the benefits.

My family didn’t typically buy fruit. We’d either grow it on our own bushes and trees, or trade with others, or best of all, we’d go wildcrafting. For weekend fun, my folks would bundle us all up in the truck with a picnic lunch, and we’d go out scouting how ripe the fruit on untended bushes in the region was getting. Wild cherries and plums are mostly pit, which means more work for less fruit, and blackberries have thorns and spiders to avoid while picking, but their strong tart flavors are unparalleled. We’d come home happy with full buckets and bellies, and the anticipation of both delicious treats now and jars full of goodness for the coming winter.

Here is one of my favorite recipes passed down from my mom. She nearly always cooked from memory alone, but she wrote this one down upon my request. The beauty of it is its simplicity: it’s one of the few things she made that even I, her not very domestic daughter, can replicate. Enjoy!

Add the berries on top of the batter.

Sprinkle cinnamon and sugar #2 over the fruit. (Daughter Tina’s note: add 1 cup sugar if the fruit is particularly tart or you like your desserts sweet; less if you don’t. But do add some, as it gives the cobbler top a delicious crunchy texture.)

Serve with cream, if you like. Or ice cream. Or on its own.

Do you ever get the spine-tingling feeling that the more-than-human world is looking out for you?

I went to make a drink the other night that involved ginger. In an attempt to save money, a week or so prior, I had made my own ginger tea (brewed from grated ginger root peelings left over from a meal in which I’d eaten the root itself). A small bottle of what I hadn’t yet used was kept in the fridge.

I’m not a butterfingered person; I’m quite facile with my hands. I rarely fumble or drop things. But this day, as I went to pour some of the ginger elixir into my cup as the last ingredient, I knocked the cup over and its entire contents spilled out onto the counter and down on the floor. The ingredients are expensive, so I wasn’t happy with myself about this waste. Sighing, I cleaned it up, and then carefully made another.

The same thing happened all over again – the ingredients poured out all over. I cleaned it up. And then it happened yet again. The third time, the bottle itself slipped from my fingers.

What is going on? I thought. Then I looked more closely at the ginger brew. The bottom third of the bottle, which I had now reached, contained small puffs of mold.

I sat down, heavily. Who knows what kind of mold this was, and what effects it might have had on my health had I unknowingly drunk it? Perhaps it would have been fine. But I suspect otherwise.

When such things happen, a person has many possibilities for interpretation. Maybe I was just not paying enough attention to what I was doing. That happens. Or maybe my hands suddenly became clumsy due to some other factor. But three times? The event was so anomalous, and repeated three times like in a fairy tale! So I, an unrepentant animist, think the ginger was looking out for me. And I feel enormous gratitude over spilled drink. 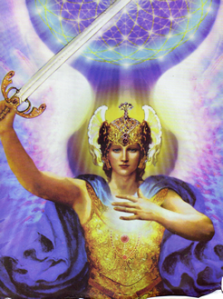 It’s the Autumnal Equinox as I write this, which the Christian church overlaid with a celebration called Michaelmas. Archangel Michael, for whom Michaelmas is named, is known to serve as a protector. He’s actually appeared to me personally not only once, but twice, in hours of need. …Me, a pagan, who doesn’t “do” iconography of good vs. evil; neither devils nor angels. But that’s a story for another time.

Some scholars have pointed out the parallels between Michael and the pre-Christian Irish god Lugh. At least Lugh is another form easily recognized as a holy agent. But the grand Archangel Michael in the guise of a hot yellow root?!

I’m also reminded of the wonderful Greek tale of Philemon and Baucis, humble peasants who were visited in their home by beggars who turned out to be disguised gods. Their generosity with food and shelter to their unexpected visitors ultimately allowed them to live when the rest of the entire stingy village below got inundated the next morning with a covering flood. So there. Love these cautionary tales. Plus they got to live out many post-human-death years as entwined trees.

The message is, you never know who you’re really dealing with.

There’s Don Juan’s crow that isn’t a crow. And the old Irish poem that ends with the line, “Often, often, often goes the Christ in the stranger’s guise.”

All of these serve as good reminders to treat the entire world as divine, particularly the humblest manifestations. If such stories speak true, sneaky godlings get a kick out of testing us that way.

And if you’re thinking, wow, what crazy unscientific thinking she’s exhibiting here, please consider premier psychologist Carl Jung’s observation in Modern Man in Search of a Soul:  “The least of things with a meaning is worth more in life than the greatest of things without it.” 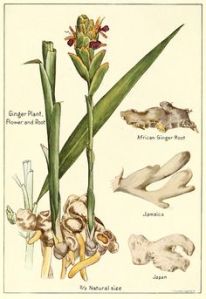 …I suggest you drink them fresh. 🙂

Hot Ginger Drink
Grate ginger.
Boil it in water, and add a sweetener to taste.
Drink this hot.
It not only tastes yummy, it’s good for soothing throats when you have a cold.
You can also buy this sort of mix commercially at Asian grocery markets. I like two brands in particular:

Moscow Mule
(An adult beverage made of non-alcoholic “ginger beer,” vodka, & lime)
In a medium-sized glass, squeeze 1/2 lime over 3 ice cubes and drop the peel in on top.
Add one jigger of vodka.
Then fill the glass with “ginger beer” (which is basically ginger plus sugar, brewed and fermented till it’s fizzy. My favorite brand is Fever Tree – it’s delicious and healthy to boot, with no corn syrup in it, but it’s pricey. To make your own version, add a dollop of strong ginger tea and a bit of sweetener of your choice, then fill to top with carbonated water.)
Stir and enjoy.
I hear that some people think a copper cup enhances the flavor. Never tried it myself.
This drink is super refreshing in the summer after work.

That lovely ginger root pictured at the top of this post was grown by my friend Hugh Johnson, a.k.a. “Biker Dude”. He runs the largest organic yellow ginger farm on the Big Island of Hawai’i.  Chances are high that whatever organic yellow ginger you find in mainland grocery stores will be some of Hugh’s.

And do yourself a favor sometime: try organic yellow ginger. Mmm. Believe it or not, it’s really really good sliced raw on Newman-O cookies.